An overview of Hydroelectricity in Canada

Hydroelectric power, also called hydropower electricity, is produced from generators driven by turbines that convert the potential energy of falling or fast-flowing water into mechanical energy. In the early 21st century, hydroelectric power was the most widely utilized form of renewable energy. This technology is far from new – people have used this force for millennia. Over two thousand years ago, people in Greece used flowing water to turn the wheel of their mill to ground wheat into flour. 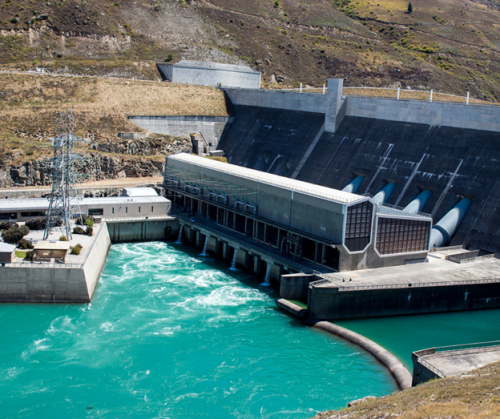 Most plants today have a reservoir of water, a gate or valve to control how much water flows out of the reservoir, and an outlet or place where the water ends up after flowing downward. Water gains potential energy and this is converted into kinetic energy as water flows downhill.

Hydroelectric energy is the most used renewable source of electricity. China is the largest producer and Canada is the fourth. Other top producers include United States, Brazil, and India. Approximately 71% of all renewable electricity on Earth is generated from hydropower. Conventional systems include Run-of-the-river systems, where the force of the river’s current applies pressure on a turbine. Storage systems, where water accumulates in reservoirs created by dams on streams and rivers and is released through hydro turbines.

British Columbia, Manitoba, Quebec, Ontario, and Newfoundland and Labrador use hydro to meet most of their electricity demand. Hydropower produces no air pollutants and has ultra-low greenhouse gas emissions. Most provinces export excess capacity electricity to the USA. Quebec is the largest exporter, at approximately $1.1 Billion in export sales per year.

The Pan-Canadian Framework will support the transition to a clean electricity future by increasing the amount of electricity generated from renewable and non-emitting sources, connecting clean power with places that need it, modernizing electricity systems, and reducing the reliance on diesel in northern and remote locations.

According to Bloomberg, global electricity demand will increase 57% by 2050. The major markets will be China and India. Electric vehicles (EVs) are forecasted to drive 9% of that demand. Between 2022 and 2024, the demand is estimated at about 2.7%, but that may increase given the current high prices of oil & gas.

Hydroelectricity has been the main source of power generation in Canada for more than a century and will continue to grow. There is also an upward trend in various sources of renewable energy in Canada across all provinces and territories, especially in Wind and Solar generators. Technology innovations in the renewable energy sector has helped substantially reduce costs and increase performance, driving the construction of new energy generation infrastructures. This growth in renewable energy sources plays a significant role in meeting Canada’s targets in its commitment on Net-Zero emissions by 2050.

Best practices, product information and other news from Nomadis

We send our communications on average once a month